Pattern Name: Layers
Problem or Question: How to distribute content when you have multiple interesting scenes to show at different distances in the same frame?
Visual Elements: The image is visually separated in horizontal layers: foreground (the lowest layer), middle-ground (the middle layer), and background (the upper layer).
Solution: Distribute the content in several horizontal zones, from the lowest part to the uppers part of the frame. You might use the Rule of Thirds, to distribute symmetrically each layer, or use the same features of the scenes for an asymmetrical distribution.

It’s more common to see images with at least the three standard layers, but the solution might apply for only two basic layers (foreground and background), when both of them have something interesting to convey.

Technical implementation: As you need to manage objects in different distance, you need a strong depth-of-field.

This pattern applies to complex, composite, images. There are many subjects, but each one is perfectly distinguishable from the others. 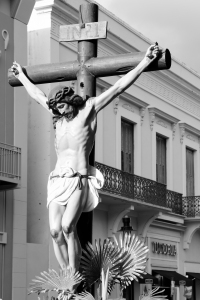 Although the application of the Layers patterns commonly splits the content in three layers is a plausible solution to use only two layers. In this image there are only two recognizable layers: the foreground with the Christ figure in the cross, and the background with the store’s front sign «Utopia». This kind of solution is recurrent in images that explore the correlations between street and business signs with people or figures in the front, and multitudinous scenarios. 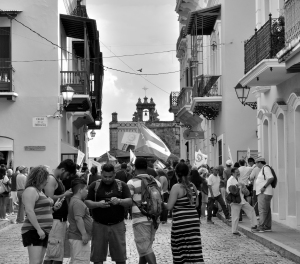 This other image is a classic example of multiple layers. We can see several planes separate by distance: the family and the couple passing by in the foreground, the men talking in the right sidewalk and the group manifestation in the middle ground, and the dove frozen in the middle of the sky with the church’s façade at the background.

The Layers pattern is useful to organize complex pictures. In those scenes, the subjects are group of people or figures at different planes with some distance between them. Each one have interesting meanings or features. This pattern usually requires the use of wide angle lenses, that reach every plane with extensive angle of view, and strong depth of field.